The Book of Mormon is a beautiful saga of a family that founded a nation. Everyone in South America is descended from this family. But the story isn’t that simple. Let me explain.

In the Bible, God spoke to prophets and instructed them to write down his words. In doing so, they preserved sacred instructions that lead us to become more godly people. Because God loves all his children, he did the same in the new world.

Just as the Lord says in 2 Corinthians 13: 1- Every word should be confirmed by two or three witnesses. The Book of Mormon is that second witness of the Savior and the teachings of God. Seriously, if you compare the two books, the gospel is the same. It is wonderful!

At the beginning of the Book of Mormon we associate with the ancient prophet Lehi in Jerusalem about 600 B.C. He’s trying to turn people around. But the people do not want to repent and instead plan to kill Lehi.

So the Lord warns Lehi about the conspiracy and also lets him know that Jerusalem will be destroyed. And Lehi gathers his family and they set out into the wilderness. But before they can go very far, the Lord instructs Lehi to send his sons back for the scriptures.

Written on brass plates, they contain not only the gospel but also their ancestors. The brass plates will preserve their language and history for generations to come.

Lehi has 4 sons traveling back to Jerusalem. They are, in order of age, Laman, Lemuel, Sam, and Nephi. Laman and Lemuel would rather complain than work. And Sam and Nephi were righteous and focused on the goal.

These men must ask Laban for the brass plates because he is the keeper of the records, which is a high position in the city. He is also an evil and greedy man.

On their first try, Laman gets the short end of the stick and is allowed to approach Laban first and ask for the plates. But Laban sends his guards after Laman and calls him a robber. Then the boys get smart and remember that their father is very wealthy. And they had to leave behind all their heavy gold for their journey. So they decide to appeal to Laban’s greed. They collect everything and give it to Laban, asking for the brass plates in exchange.

But Laban is much more evil than expected because he sees that the gold has already been brought to him and his guards chase Lehi’s sons away and try to kill them so that he can keep the treasure.

The boys narrowly escape with their lives again. Now Laman and Lemuel are angry. They’re done with this errand and freaking out because they almost lost their life. So they start hitting their younger brothers. I mean, that’s the logical step, isn’t it? (Sarcasm)

The Lord intervenes on behalf of Sam and Nephi and sends an angel to stop Laman and Lemuel. It’s a beautiful scene that I wish I’d been there to witness in person. After the angel’s intervention, the boys are ready to listen to Nephi. He makes them wait outside the walls of the city while he prayerfully goes in alone to try the plates again.

As he approaches Laban’s house, he sees Laban lying on the street. He’s so drunk he passed out. As Nephi approaches, the Lord tells him to kill Laban and get dressed and get the plates. It’s a big problem because it goes directly against the commandments. But 1 Nephi 4:9-13 says:

9 And I saw his asword, and I drew it from its scabbard; and its hilt was of pure gold, and its workmanship was exceedingly fine, and I saw that its blade was of the most costly steel. 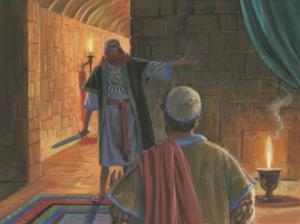 10 And it so happened that I was aforced by the spirit to kill Laban; but I said in my heart: At no time have I shed human blood. And I backed away, not wanting to kill him.

11 And the spirit said to me again: Behold the amr has bput it in your hands. Yes, and I also knew that he had tried to take my life; yea, and he would not obey the commandments of the Lord; and he had ctook away our property.

12 And it came to pass that the spirit said unto me again: Kill him, for the Lord hath delivered him into your hands;

13 Behold the Lord akills them bevil to bring forth his righteous intentions. it is cbetter that a man perish than that a nation shrink and perish i.eUnbelief.

The Lord had given Laban several opportunities. It makes me realize how important the brass plates will be to the Book of Mormon people. So Nephi kills Laban and puts on his clothes and goes into Laban’s house and meets Laban’s servant Zoram.

When he pretended to be Laban, the Lord was with Nephi, and he sounded exactly as if Laban and Zoram had led him to the brass plates and spoken to him about his meeting with the Jewish elders. Nephi asks Zoram to come with him to the city gates. When Nephi’s brothers see Nephi, they mistake him for Laban and run. When Nephi calls for them, he takes off Laban’s hat and Zoram realizes his mistake.

In order to keep her wilderness journey secret, Zoram must remain silent about it. So they promise Zoram that if he comes with them he will be a free man. And so Zoram becomes another member of Lehi’s family.

Nephi and his brothers triumphantly return to their camp and to their father Lehi. And everyone celebrates and Lehi reads the plates to everyone. They later return to Jerusalem to fetch Ishmael and his family because he has many daughters and Lehi’s sons need wives. The sons don’t complain at all about this trip, I noticed that. 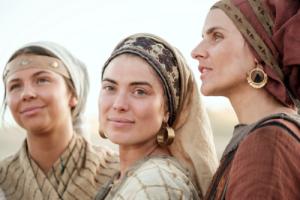 After they are all together in Lehi’s camp, the daughters of Ishmael are given in marriage to the sons of Lehi. And they continue their journey to the ocean. They build ships with the Lord’s help and travel to the Promised Land.

It’s a long journey, but I’m going to cut it short. After arriving in the new world, the Lord warns Nephi that Laman and Lemuel and their allies are preparing to kill Nephi and those who follow the Lord.

So in the night Nephi gathers his wife, Sam, Zoram, and their families, and all who will follow Christ, and they set out. This is the beginning of two nations forever called Nephites and Lamanites in the Book of Mormon. The Nephites follow God and have prophets to lead them. The Lamanites do not believe in God and do not keep the commandments.

As the Book of Mormon continues, we see that the prophets keep records of the people. In particular, they are instructed to document their dealings with God. The records are passed from father to son and change hands many times.

So many beautiful testimonies fill the Book of Mormon. I highly recommend reading it if you haven’t. There are many great miracle stories and many humble men have worked hard to record them.

The Book of Mormon even documents how Jesus visited the Americas after his crucifixion. It’s an amazing and beautiful experience. Read 3 Nephi chapters 9–10 and you will be amazed.

Then, several hundred years after the Savior came, we meet a young man named Mormon. He is both the military leader of the Nephites and the prophet. His people have been at war with the Lamanites for many years, and the Nephites are becoming more and more wicked. This Scripture shares the dire fate of the wicked here in the Americas.

5 But, said (Lehi), in spite of our afflictions we a aLand of promise, a land that is bchoice before all other countries; a land that the Lord God has cThe covenant with me should be a land for the inheritance of my descendants. Yes the Lord has i.emortgaged this land to me and my children forever, and to all who are to become so efrom other lands led by the hand of the Lord.

6 Therefore I, Lehi, prophesy, according to the working of the Spirit that is in me, that it will come to pass anone come into this land unless they are brought by the hand of the Lord.

7 Therefore this aLand is dedicated to the one it will bring. And if they serve him according to the commandments which he has given, it shall be one country bfreedom for them; therefore they must never be taken into captivity; if so, it shall be because of iniquity; for when injustice grows great cCursed shall the land be for their sakes, but to the righteous shall it be blessed forever.

And unfortunately the Mormons are bad and are beginning to fall by the sword in large numbers. He and his son Moroni have access to every record of every prophet going back to Nephi. There are even a few extras that don’t come from the family line. There is a record of Ether and his life. And the brother of Jared and the story of the Jaredites. 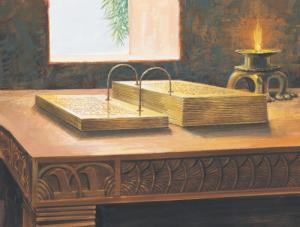 So the Book of Mormon is a compilation of many other sacred books. Mormon began the compilation and his son Moroni finished it and hid it in a stone chest on Cumorah Hill.

In my mind’s eye I see these great men in a great cave of records. And they prayerfully examined the records and chose what would have been most valuable to us in our day. Actually, I don’t have to imagine it that difficult. The scripture Mormon 1:2-4 is very clear as Mormon shares his experiences.

2 And around the time that aAmmaron hid the records from the Lord, he came to me (I was about ten years old and starting to grow blearned something after the manner of the learning of my people) and Ammaron said to me: I see that you are a csober child and quick observing art;

3 Therefore, when you are about twenty-four years old, I want you to remember the things that you have observed concerning this people; and if you are that age go to aLand Antum, to a hill that shall be named bwasher; and there I have deposited to the Lord all the holy carvings concerning this people.

4 And see, you will take them aplates of Nephi for yourself, and the rest you shall leave where they are; and ye shall write on the plates of Nephi all that ye observed concerning that people.

I have skimmed the surface of everything in the Book of Mormon. It’s the writing. I know because I’ve prayed about it and God has warmed my heart. I will close this article with the end of the Book of Mormon. Some call it Moroni’s promise; I call it one of the most beautiful testimonies I have ever read.

3 Behold, I would exhort you, as you read these things, if there is wisdom in God that you read them, that you remember how amerciful was the Lord unto the sons of men from the creation of Adam down to the time ye shall receive these things, and bthink about it chearts.

4 And when you will receive these things, I want to exhort you that you will aIn the name of Christ, ask God the Eternal Father if this is not the case bIs correct; and if you should ask with a csincere heart, with i.ereal intention, having eBelieve in Christ, he will fmanifest the Gyou the truth of it by the power of the Holy Spirit.

5 And by the power of the Holy Spirit you may aknow btruth of all things.

I have included many links in this article to make it easy for you to read the Book of Mormon yourself. Listen. You will not regret it.